UNESCO Chair to be set up at ICCBS-KU

KARACHI: The University of Karachi and UNESCO (United Nations Educational, Scientific and Cultural Organization) on Friday made an agreement to mutually establish a UNESCO Chair on 'Medicinal and Bio-organic Natural Product Chemistry' at the International Center for Chemical and Biological Sciences (ICCBS), University of Karachi, says a Press release.
Vice Chancellor University of Karachi Prof. Dr. Khalid Mehmood Iraqi, on behalf of the University, signed a Memorandum of Understanding (MoU) in the absence of UNESCO officials in a ceremony held at the H.E.J. Research Institute of Chemistry, University of Karachi.
Earlier, UNESCO Director-General Audrey Azoulay signed the same MoU with the University of Karachi at her office in Paris on the 2nd of October 2020. The UNESCO Chair was approved in UNESCO General Assembly this year.
In the ceremony, at the H.E.J. institute, Prof. Dr. Atta-ur Rahman, Chairman of Prime Minister's Task Force on Science and Technology, Prof. Dr. M. Iqbal Choudhary, Director of the International Center for Chemical and Biological Sciences, and Coordinator General COMSTECH and many other officials and scholars were also present. A video message from Ms. Patricia McPhillips, the Director and Representative of UNESCO in Pakistan was also played in the ceremony.
Speaking on the occasion, the University's Chief Prof. Iraqi thanked the UNESCO officials for their support, and said, "This is a landmark occasion for the University of Karachi."
He maintained that the varsity had passed another milestone on the road towards academic and research excellence by signing an agreement with UNESCO to set up a UNESCO Chair on 'Medicinal and Bio-organic Natural Product Chemistry' at the ICCBS-University of Karachi. The objectives of the Chair are important in term of their impact, he said, adding that this Chair will strengthen south-south and south-north cooperation.
The international center has many achievements, while this is made possible through teamwork, he observed, adding that ICCBS is the premier research center in Pakistan that set up a benchmark for other institutions to follow
In her video message, Ms. Patricia McPhillips congratulated the University of Karachi for setting up of UNESCO Chair at the ICCBS, which is also famous as the 'UNESCO Centre for Excellence Category-2 Institute.
She informed the ceremony that UNESCO already owned a few UNESCO Chairs in different institutions in Pakistan. Now the UNESCO Chair on 'Medicinal and Bio-organic Natural Product Chemistry' is set up at the ICCBS, which is one of the premium institutions of biological and chemical sciences in the world, she said.
This is very positive step towards promotion and understanding of medicinal and bio-Organic chemistry projects, she observed.
Prof. Atta-ur Rahman congratulated the University for having another feather in the cap. This is really an honor for the international center of University of Karachi that UNESCO established a Chair on 'Medicinal and Bio-organic Natural Product Chemistry' in its premises, he observed.
He pointed out that ICCBS has achieved several milestones on the way to science and research by establishing many international centers for excellence in its premises.
Prof. Dr. M. Iqbal Choudhary said that the agreement would be a major landmark in term of facilitating collaboration between high-level, internationally-recognized researchers and teaching staff from the university and other institutions in Pakistan, as well as elsewhere in Asia and the Pacific, Europe, and in other regions of the world.
The purpose of the Chair is to promote an integrated system of research, training, information and documentation on natural medicinal/bio-organic product chemistry, he told the ceremony.
He said that ICCBS was the only institution in Pakistan that was not only certified by ISO but it also became the 'UNESCO Centre for Excellence Category-2 Institute'.
According to MoU, the ICCBS-University of Karachi will arrange for the chair to participate in UNESCO programs and activities with a view to strengthening international academic cooperation. Wherever possible, the ICCBS will also arrange for the chair to engage in the exchange of professors, researchers, and students with other universities within the framework of the UNITWIN Programme. 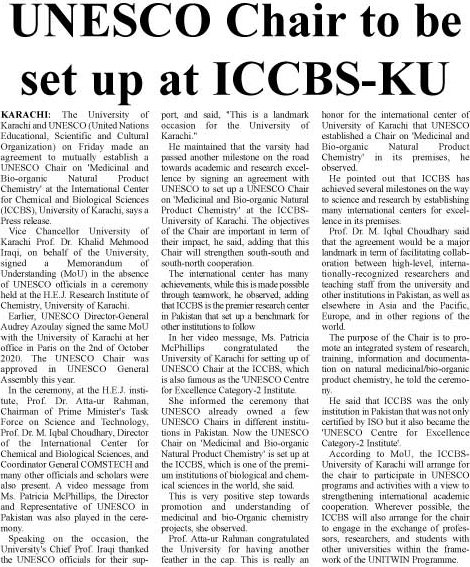