US desires to work with Pakistan, says senior US official

US desires to work with Pakistan, says senior US official

ISLAMABAD: Visiting U.S. Acting Assistant Secretary of State Ambassador Alice Wells conveyed the U.S. desire to work with Pakistan in furthering the shared objectives of stabilizing Afghanistan.
Ambassador Wells held talks with Pakistan Foreign Secretary Tehmina Janjua at the foreign ministry in Islamabad at a time when relationship between Pakistan and the U.S. over the January 1 Tweet by President Donald Trump in which he had leveled serious charges against Pakistani including the allegation that the country supports the Afghan Taliban and the Haqqani Network.
Days after the controversial tweet, U.S. Ambassador to the United Nations Nikki Haley announced that Washington would withhold 255 million U.S. dollars in assistance to Pakistan from the Foreign Military Financing (FMF) fund, which is used to provide military equipment and training to friendly countries. In apparent a tit-for-tat reaction, Defense Minister Khurram Dastgir Khan announced last week that Pakistan has suspended defense and intelligence cooperation with the United States amid growing tensions over the U.S. suspension of military aid to Pakistan.
The visit of Ambassador Wells is the first visit by a senior American diplomat amid the heightened tension.
"Noting the importance of the longstanding bilateral relationship, Ambassador Wells acknowledged Pakistan's efforts in eradicating terrorism and conveyed the US desire to work with Pakistan in furthering the shared objectives of stabilizing Afghanistan," a statement from Pakistan Foreign Ministry quoted Ambassador Wells as saying.
She argued that as an immediate neighbor and important country of the region, Pakistan's support was critical to the success of the U.S. strategy for Afghanistan, the statement said.
To this end, Ambassador Wells underlined the need for strengthening intelligence cooperation between the two sides to improve coordination in counter-terrorism efforts.
The two sides agreed that all initiatives owned and led by the Afghans for seeking a peaceful solution should be supported by the regional countries. Pakistan's positive role in several peace initiatives was appreciated, the foreign ministry said.
The visit was part of regular engagement between the two countries on bilateral and regional cooperation.
The Pakistani Foreign Secretary underscored that the relationship with the United States needed to move forward under an environment of mutual trust and respect, the statement said.
Ambassador Wells was accompanied by senior officials from US National Security Council and Ambassador David Hale. Foreign Secretary was assisted by senior officials of the Ministry of Foreign Affairs.
The U.S. delegation was apprised about recent counter-terrorism actions taken by Pakistan's law enforcement agencies that contributed to visible improvement in the security situation of Pakistan. It was mentioned that these comprehensive counter-terrorism actions would also contribute towards peace and stability in the entire region.
In the context of the regional situation, the Foreign Secretary expressed concerns on the continued use of Afghan soil by elements hostile to Pakistan's stability. She added that strengthening border management mechanisms between Pakistan and Afghanistan was vital to addressing concerns relating to cross border movements.
Early repatriation of Afghan refugees was also important for improving relations with Afghanistan, she emphasized. The Foreign Secretary reaffirmed Pakistan's commitment to continue its efforts for promoting peace and stability in the region.
The Foreign Secretary drew the attention of the US delegation to the recent irresponsible statement by the Indian Army Chief and the pattern of escalation by India on the LoC and the working boundary and condemned the Indian use of IEDs resulting in the martyrdom of Pakistani soldiers last night. She asked the US side to advise restraint to India and stop its escalation tactics.
Meanwhile, Alice G. Wells also called on Adviser to Prime Minister on Finance, Dr. Miftah Ismail here Monday.
They discussed current state of Pak-US ties with particular emphasis on economic cooperation.
Adviser Miftah Ismail welcomed Ms. Wells and said that such bilateral visits are helpful in understanding each other's point of view. He said relations between the two countries have been affected by certain recent developments and it was important to remove the misperceptions.
US Ambassador, David Hale, Secretary Finance Arif Ahmed Khan and other senior officials of the Ministry of Finance were present on the occasion. - NNI 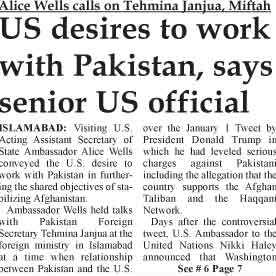