KARACHI: The Sindh High Court on Tuesday ordered the sugar mills owners to purchase sugarcane at the price of Rs172 per 40 kilograms till further orders.
A two-member bench of Sindh High Court (SHC) issued orders in a case related to the fixation and purchase of sugarcane price over a dispute between growers and sugar mills owners.
The bench also ordered the government of Sindh to notify the sugarcane price after consulting the parties within one week.
The court ordered the government to convene a meeting within two days with the parties including the growers, millers and the Cane Commissioner to consult over the matter. After the consultative meeting the matter should be decided with the approval of the provincial cabinet and the chief minister, and the approved rates should be notified accordingly, the bench further ordered the government.
The court adjourned the hearing of the case till January 25.
The high court in a previous hearing lashed out at the provincial government for not doing enough to resolve the stand-off over sugarcane price between the crop's growers and sugar mills owners.
In November 2017, acting upon court orders, the Sindh Sugarcane Control Board chaired by Sindh Agriculture Minister Sohail Anwar Siyal, had fixed the rate of sugarcane at Rs182 per 40 kilograms for 2017-18 crushing season - a decision vehemently opposed by the mill owners.
The millers continued to deny growers the set price, with some even shutting down their mills, leading the farmers to protest before the matter was brought to the court. - NNI 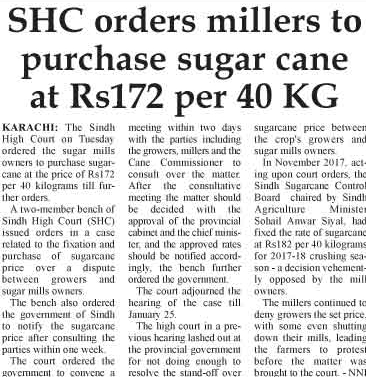