LAHORE: The bank accounts that were alleged to belong to the accused in Zainab rape and murder case do not exist, said the State Bank of Pakistan.
The central bank said it found no such bank accounts that were maintained by Imran Ali, the accused in Zainab murder case. The bank handed the record to Federal Investigation Agency that appointed an officer of banking circle to probe the accounts.
The FIA took stock of the details provided by the central bank and confirmed that Imran Ali has no bank accounts under his name. The sources privy to the Punjab government told Samaa that it was mulling taking legal action against the television anchorperson, who churned out the claims regarding bank accounts, after the final reports are received.
Punjab government announced on its Twitter handle that Dr. Shahid Masood did not appear before the JIT to share the proofs regarding his claims on bank accounts of Zainab's murderer. The Tweet said the television anchorperson's contacts numbers were unreachable.
Earlier the reports of these alleged accounts surfaced on social media that widely quoted a famous television anchorperson who claimed Imran Ali has over 30 to 40 bank accounts mostly the foreign. He also accused Imran Ali to be part to an international child sex racket.
Taking notice of the reports of his claims, the Punjab government set up a joint investigation committee to launch an inquiry into alleged foreign accounts of Imran Ali accused of raping and killing seven-year-old Zainab Ansari and seven other young girls in Kasur.
Appearing before the Supreme Court, the TV anchor Dr Shahid Masood said the suspect had 37 local and foreign currency accounts and that he was a member of international racket.
During the hearing, Chief Justice Saqib Nisar directed Punjab Advocate General to order an inquiry into Dr Shahid Masood's claim. "The Punjab Government has ordered an inquiry in order to ascertain as to how many alleged bank accounts did the suspect Imran Ali had in his name," a notification said.
Meanwhile, Punjab government's spokesperson Malik Ahmad Khan on Friday categorically dismissed reckless allegations of Dr. Shahid Masood while terming them an attempt to belittle the provincial government's efforts.
While terming Masood's allegations a figment of him, Khan stated that State Bank of Pakistan (SBP) thoroughly scrutinized local and international data and didn't find any account linked to prime accused in Zainab murder case. Khan stated that joint investigation team (JIT) summoned Dr. Masood twice but he failed in registering an appearance.
"Counterfeit details linked to Imran s bank accounts (prime accused in Zainab murder case) were produced. Both SBP and JIT have submitted their findings in this regard", spokesperson told attendants.
"Punjab government has served legal notice to Dr. Shahid Masood on hurling false allegations whereas the ministers (framed by Dr. Shahid Masood in his fragmented news piece) holds right of legal action against him", Khan added.
Meanwhile, anchorperson and political commentator Dr Shahid Masood has said regarding his claim in Zainab murder case that news are sometimes wrong and are corrected as a development unfolds with the passage of time. Masood, in his show that aired late Wednesday, alleged that Zainab's suspected rapist and murderer was a member of an international pornography ring and operated as many as 37 bank accounts for transactions.
While answering questions posed by journalists about his claim, Dr Masood said that he prays for his news to be wrong since seven-year-old Zainab's case is a horrific incident. He said that to probe the case is not his job.
Meanwhile, Punjab Law Minister Rana Sanaullah said on Friday that the apex court should register a case against Dr Shahid Masood for coming forth with false allegations of political figures being involved in the Zainab rape and murder case.
Speaking to a private television channel, Rana Sanaullah said that the Zainab rape and murder case was being investigated from all angles. "No organised group is behind suspect Imran Ali," insisted Rana Sanaullah.
The law minister urged the Supreme Court to register a case against Dr Shahid Masood, a television anchor, for coming up with false allegations that suspect Imran Ali had 37 bank accounts, some of them holding foreign currency, in his own name.
"Reports that the suspect had multiple bank accounts is false," he said. "Supreme Court should register a case against the one who gave this news," he added. - NNI 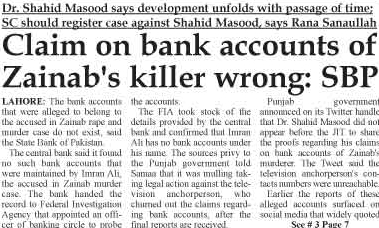